Spread of infectious diseases can be investigated by means of mathematical models.

The I-model is the simplest exponential model for disease spread. It focuses only on the number I of infected people. All infected people will also recover.

Let us assume that at day 0 one person - the so called patient zero - is ill. The patient 0 infects 2 person during 1 day and becomes healthy at the same time. So on day 1 there are 2 persons ill. Each of them infects ahain 2 persons during one day and recovers himself. So, on day 2 there are 4 persons ill. If this procedure continues the disease spreads as depicted in the figures below: 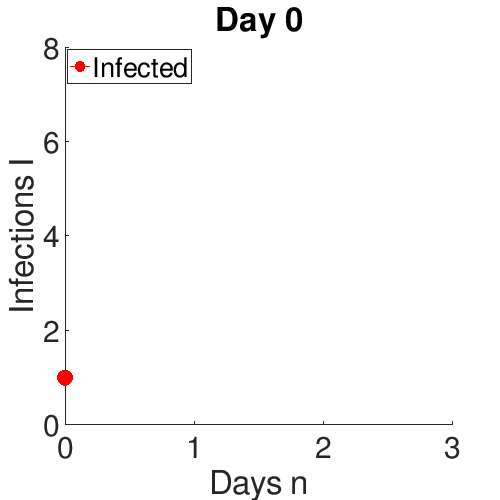 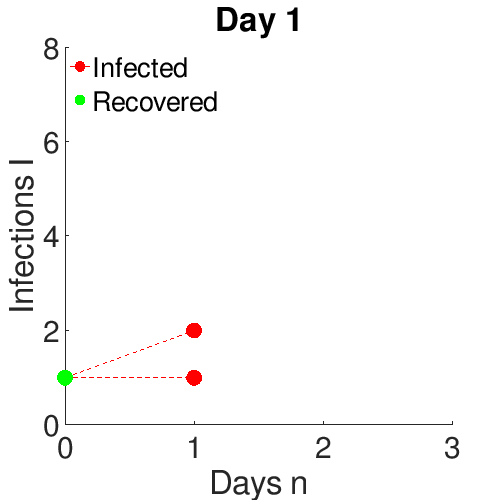 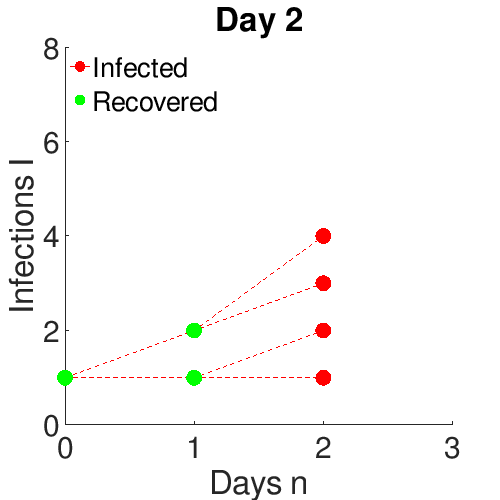 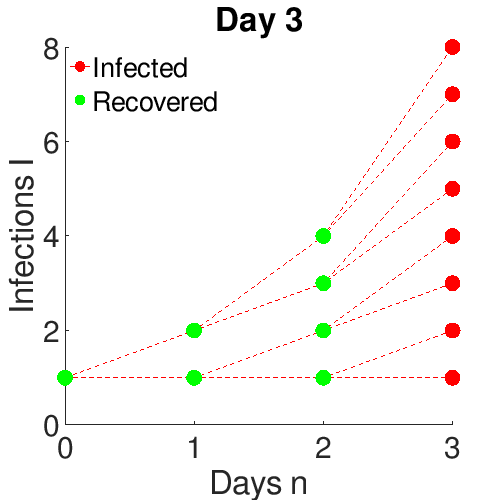 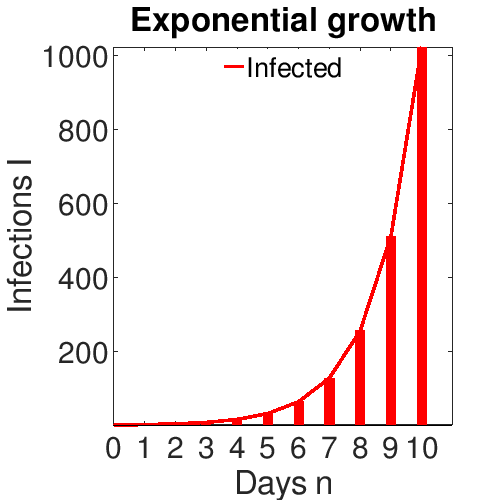 The grows at the beginning is slow and the spread of the disease is underestimated. The spread becomes monstreous fast:

We will generalize the I-model as folows. Suppose that there are $I(0)$ people infected at time 0. Each one infects $\pmb R_0$ people during $T$ days. The number of infected people after $k T$ days is hence:

We get the number of infected people for an arbitrary time $t$ by setting $t = k T$:

The following figure shows the desease spread for various values of $\pmb R_1$: 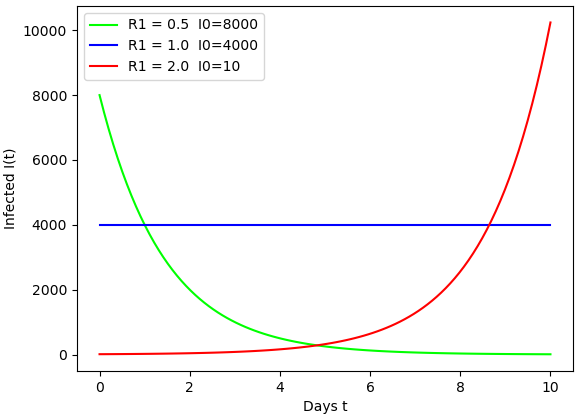 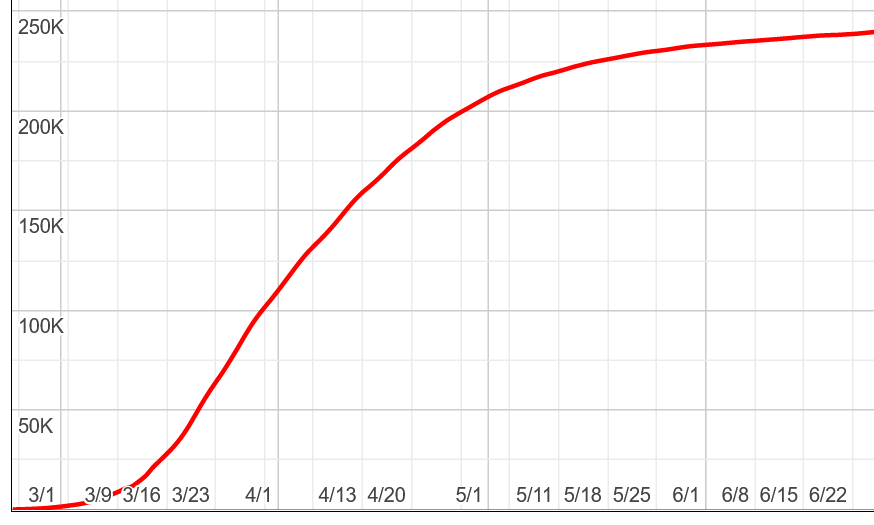 grows exponentially only at the beginning of the epidemy but flattens during the time. The cause is mainly due to limiting measures ("lockdown") that reduce the number of contacts. But there is also a fundamental reason for slowing down: the number of all people is finite and hence the number of people who can get infected in the future decreases. During the time the infected people do not have many opportunities to infect further people.

A more realistic way of modelling the spread of disease is using the SI model. The main characteristics of this model is that it takes into account the finite number of people. The whole population of $N$ people is divided into 2 categories called compartments: people who are susceptible $S$ and people who are infectious $I$.

With the introduction of differential and proportional quantities: 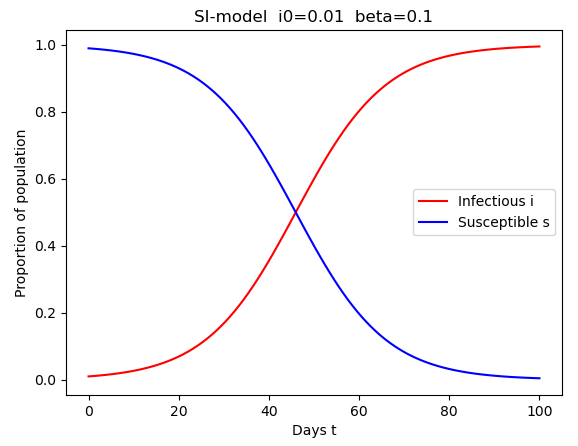 We observe the typical S-shape of the "sigmoid" curve. The curve matches much better the real spread of Covid-19.

A still better model is the SIR model that was introduced already in 1927 by Kermack and McKendrick. The whole population of $N$ people is divided into 3 compartments: people who are susceptible $S$, people who are infectious $I$ and people who have recovered $R$:

A more general interpretation of the compartment $R$ is "Remaining" or "Removed" people: those people who are neither susceptible nor infected. These are people who have recovered or died or are immune against the disease. The "Infectious" people are also call "Infectives" or "Infected". We assume that "infected" people are "infectious".

These equations cannot be solved analytically but only numerically. Two solutions for different parameters are shown below: 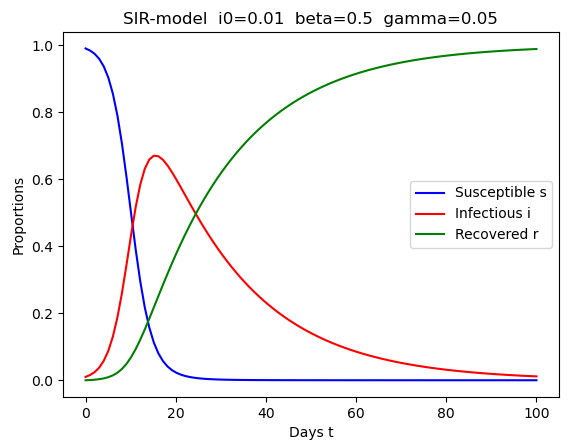 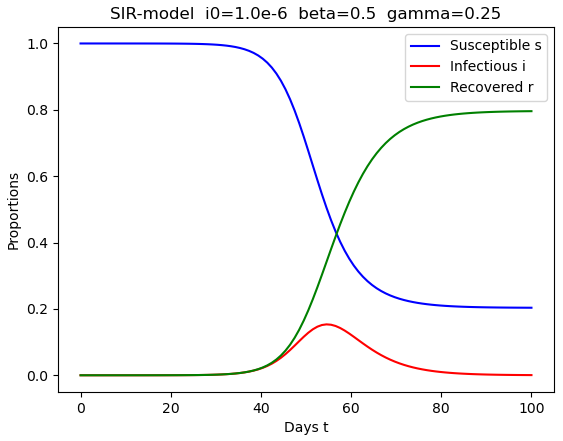 Reproduction number in the SIR-Model

Progression of the disease in the SIR-model

In the last section we saw how the disease behaves at the beginning of the outbreak. We will now investigate the furher progression of the disease. It is sufficient to consider only the equations (23a) and (23b), because $r(t) = 1 - s(t) - i(t)$. 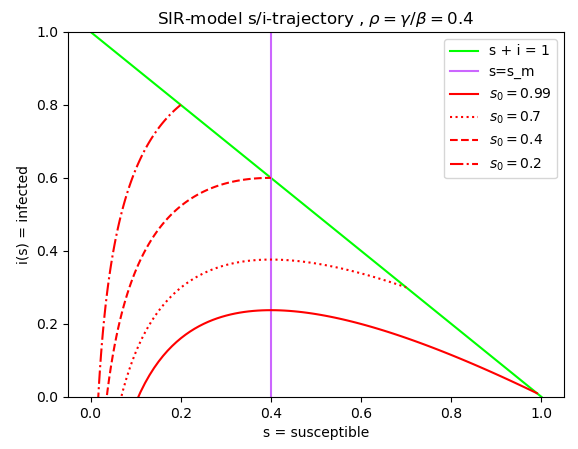 Total number of infected people in the SIR-model

How many people get infected during the epidemy? These are the people who passed through the I-compartment to the R-compartment, so people who recovered or died. The proportion of these people with respect to the whole population is $$ i_{total} = \int_{0}^{\infty} i(t) dt = r_\infty = 1 - s_\infty \tag {41} $$ because $i_\infty = 0$.

Herd immunity in the SIR-model

The SIR-model can be further extended and refined by introducing further compartments. Besides these deterministic models there are also stochastic and other models that can be found in the literature and online.