Matter appears in three possible states (phases): solid, liquid and gas. (The forth state 'plasma' or 'ionized gas' is not considered here.) The state is fully characterized by the state variables: P (pressure), V (volume) and T (temperature). Since the volume depends on the mass we usually consider 'specific' volume v which is the volume of 1 kg matter. The possible states of a particular substance represent a surface in the 3D space <P, v, T> as it is shown below: 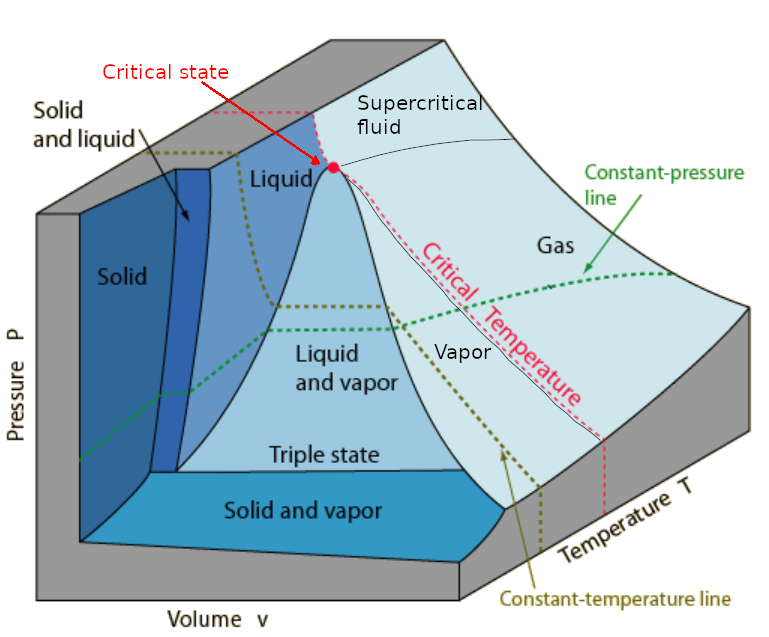 There are regions with only one state and regions in which two states coexist. The liquid and vapor region is called the '(saturation/vapor) dome' because it has the shape of a dome. The boundary between the dome and the liquid region ends at the 'critical state'. If the temperature is greater than the critical temperature the vapor cannot be compressed to liquid any more. The 'triple state line' is the only region in which all three states appear simultaneously. The light blue region represents the gaseous state that can be subdivided into: vapor, (superheated) gas and supercritical fluid.

The projections of the 3D diagram to 2D diagrams are also very useful even if some information of the <P, v, T> surface is lost. The PT diagram shows phases at a specific constant volume and is illustrative for phase transitions:

The whole solid/liquid region of the 3D diagram collapses into the green line which is just the boundary between the solid and liquid phases. The full green line is typical for the most substances that expand at melting and shrink at freezing. The dashed green line represents the anomalous behaviour of water: ice is lighter that liquid water.

The whole liquid/vapor region ("dome") of the 3D diagram collapses into the blue line which is just the boundary between the liquid and vapor (gas) phases. This line start at the triple point which is the projection of the triple line. The line ends at the critical point. Beyond this point gas and fluid cannot be distinguished.

The Pv diagram is usefeful in thermodynamics because the product P ⋅ v corresponds to work (energy). 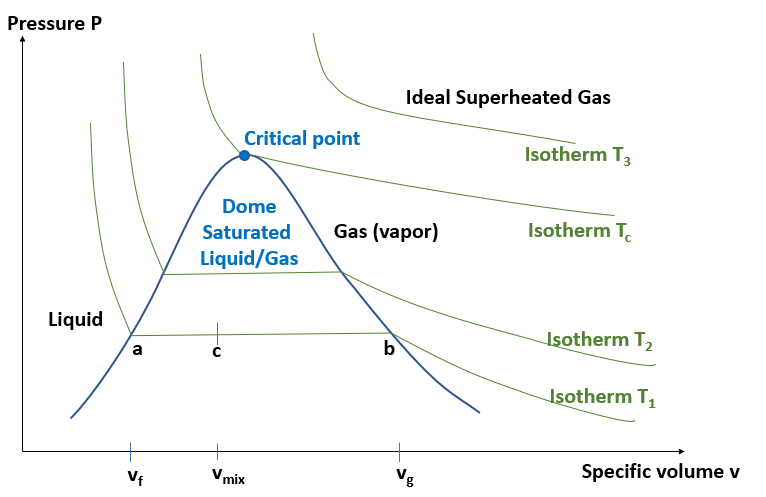 The relative content of gas in the mixture is called the 'quality' x of the vapor: