Let us recap the Lorentz transformation that we derived in the introductory article.

Spacetime diagrams, developed by the German mathematician Hermann Minkowski (1864 - 1909), are very useful to illustrate the physics of relativity. In a fixed inertial frame $S$, we draw one direction of space $x$ along the horizontal axis and the scaled time $c t$ on the vertical axis.

We can also draw the axes corresponding to an inertial frame $S'$ moving with relative velocity $v$ with respect to $S$ (blue axes):

We also included a system $S''$ moving with velocity $-v$ with respect to $S$ (magenta color).

I will mostly considered only spacetimes with one time axis and one space axis. These are refered as (1+1)-dimensional spacetimes. Notice that the time dimension is kept separately from the space dimension. The general spacetime has (1+3) dimensions.

We have seen that simultaneity is relative and temporal ordering of events can differ for different observers dependent on their velocities. This behaviour can be illustrated and explained by meens of the light cone.

The light cone at a point P arises by drawing light rays starting or ending at point P. So, in fact there are two cones: the future light cone and past light cone. In Figure 11 ellipses are drawn to indicate the situation in the general 1+3-dimensional space.

Consider an event Q inside the light cone. Any line of time simultaneity with Q has a slope less than 45° and hence point P is always below this line. It follows that P precedes Q for any observer.

On the other hand the ordering of an event R outside the light cone depends on the velocity of the moving observer. An observer that moves slowly sees the event R following P, because P is below the green line of simultaneity. An observer that moves fast sees the event P following R, because P is above the red line of simultaneity. P and R cannot be temporarily ordered.

Events outside the light cone of P cannot influence P and cannot be influenced by P because information cannot travel faster than light.

Our well-known world obeys the Euclidean geometry - points with equal distances from the origin lie on circles: 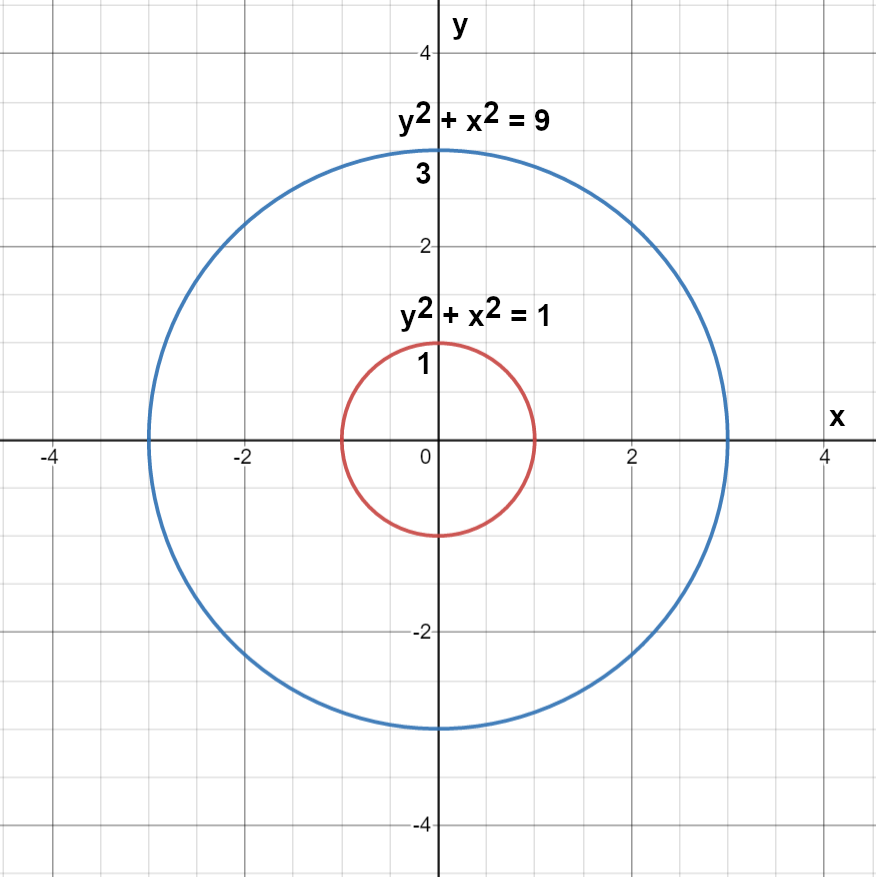 In the Minkowski's spacetime points with equal distances from the origin lie on hyperbolas: 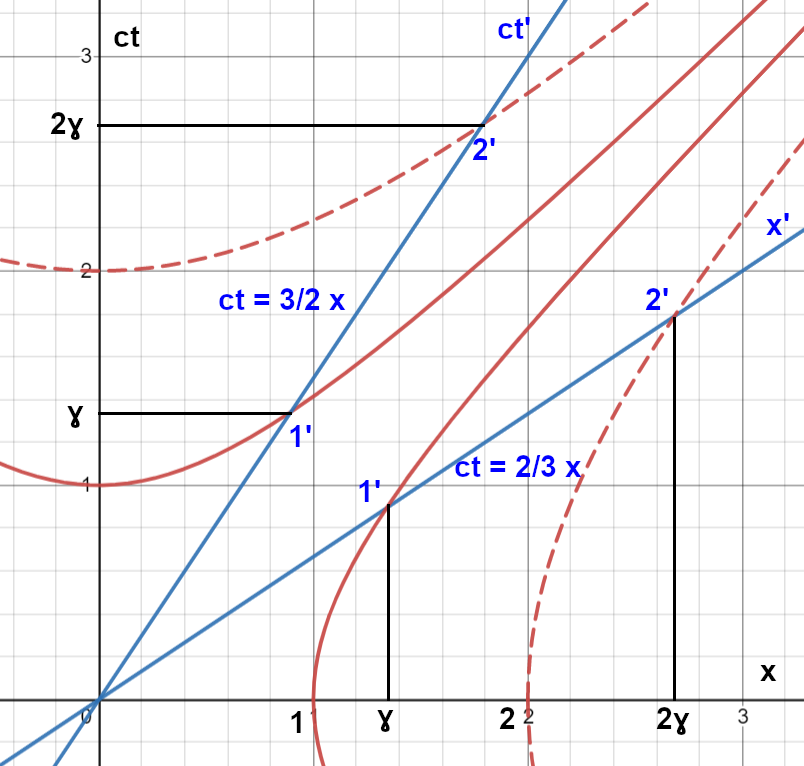 The fact that the time passes differently in moving frames is rather difficult to understand because it contradicts our perception of a unique global time. Let us restate the time dilation in other words. Alice und Bob have each a clock and the clocks run at the same pace for each of them. At a particular instant Alice checks the time and sees $t_1$ at her clock and $t_1 / \gamma$ at Bob's clock. Bob has indeed $t'_1 = t_1 / \gamma$ on his clock. Bob and his clock are delayed with respect to Alice. When Bob looks at Alice's clock he sees the time $t_0 = $t'_1 / \gamma = $t_1 / \gamma^2$ at her clock. For Bob, Alice is not at the point $P_1$ but at at the point $P_0$. Alice and her clock are delayed with respect to Bob. (Bob will be at time $t_1$ later, in fact when he will be at the point $P'_2$).

Alice and Bob are twins. One day Bob leaves Alice to visit the planet P. He travels at velocity $v$ close to light speed. After he reaches P he turns and flies back to Earth. Alice knows that he was travelling at a high speed, so his clock was slower. She expects that he will be younger than herself after his return. Bob sees the situation differently. He was at rest inside his spaceship and for him Alice was moving with respect to him, so he expects Alice aged less than himself at the reunion. These controversial situation is called the twin paradox.

We will now resolve the apparent paradox and show that it is not a paradox at all. Alice will be older than Bob at his return.

When Alice is at B at the time $T$ she observes Bob reaching the planet P. Bob's clock shows the time $T / \gamma$ and he sees Alice at A and her's clock showing $T / \gamma^2$ The line PA is the line of simultaneity for Bob at P.

Now, Bob makes a sharp turn by 180° and moves back at velocity $-v$ with respect to Alice. He is now fixed in the violet frame $S''$. After the turn he sees Alice suddenly at the point C which lies at the new line of simultaneity PC for Bob. So, Bob sees Alice to age suddenly from A to C. From symmetry reasons, the coordinate of C is $(2 T - T / \gamma^2)$.

Consider a rod of length $L_0$ that is at rest in a Bob's frame $S'$. In the spacetime, the back end of the rod moves along the ct'-axis:

Now, assume that the Bob's frame $S'$ moves with respect to a stationary Alice's frame $S$ with the velocity $v$:

Bob does not agree with this proposal. When he will run with the ladder, the ladder will be at rest with respect to him and stays $2L$ long. But the barn will move relatively to him such its size will shrink to $L / \gamma$. The situation will get much worse.

Who is right? We assume (wrongly): Since there is only one 'reality' one of the observers must be wrong. Let us have a look at the spacetime diagram:

When Bob's ladder hits the wall of the barn at the point P he sees the end of the ladder at the point QB that is for him simultaneous with P. According to him the ladder is surely not in the barn, that is represented by a pink color.

Both observers are right and our assumption about 'one reality' is wrong. The situation involves several events whose simultaneity is observed differently by moving observers. So, the "ladder and barn paradox" is not a contradiction to the theory of relativity and does not need a "resolution". It is an illustration of the relativity of simultaneity.