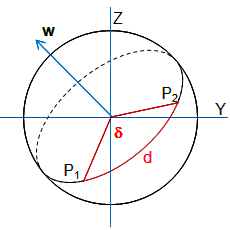 be the vectors corresponding to the two points P1 and P2, respectively. The great circle is located in the plane OP1P2 spanned by these two vectors.

The obvious choice for the vector u is the normalized vector p1:

is orthogonal to the plane OP1P2. The unit vector

is in the plane OP1P2 and is orthogonal to u.

Another way to compute the vector v is by using the Gram-Schmidt orthonormalization process. The angle δ between p1 and p2 can be computed using the scalar product:

The projection of p2 to u is:

is orthogonal to p1 and is in the plane OP1P2. Hence the normalized vector v is our searched vector:

The above calculations break if the vectors p1 and p2 are parallel, because then they do not specify a plane. This happens if the corresponding points are either identical or antipodal. In this case there are infinite many great circles through P1 and P2. Their equations are still given by

where v is an arbitrary unit vector orthogonal to u.

The shortest path between two points on the earth surface is the circular arc on the great circle between these points. So, the shortest distance d is

where R is the earth radius and δ is the angle between the two points. From the equation (6) it follows:

By substituting spherical coordinates and using the identity:

Finally, the shortest distance d is:

Heading (also called bearing or azimuth) is the angle α between a great circle and a meridian. Heading plays an important role in navigation. When we travel from the point P1 to the point P2 on the shortest path, then the heading at point P1 specifies the starting direction of our journey. The heading changes during the voyage, of course.

Heading as angle between planes

The dot product of the normalized vectors w and m equals the cosine of the heading angle α:

When we can take arccos() we get the angle α, 0 ≤ α ≤ 180°. The usual convention is that a positive angle denotes travelling eastwards while a negative angle denotes travelling westwards. Under the assumption that we travel along the shorter arc from P1 to P2 we can determine the direction by considering the vector product w. When it points upwards with respect to the positive z-axis the journey goes eastwards, when it points downwards the journey goes westwards. So, our formula for the heading angle is finally:

Simplification of the geometry

To simplify the following calculations I will make two assumptions without loss of generality:

Under the simplifying assumptions we get:

Heading as angle in a spherical triangle 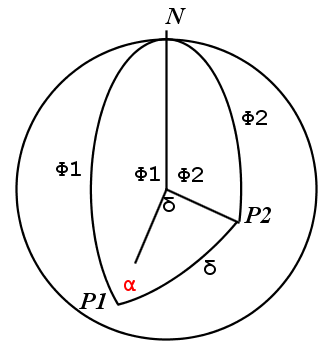 The heading is the angle at the vertex P1 of the spherical triangle NP1P2, where N is the north pole. The sides of this triangle are arcs of the respective great circles and their lengths are equal to the respective angles at the center of the Earth.

Now we can apply the cosine rule formula for the side P2N that is opposite to the angle α (see the equation (10) in Weisstein, Eric W. Spherical Trigonometry in MathWorld):

Let us have a look at the geometry of the vector w: 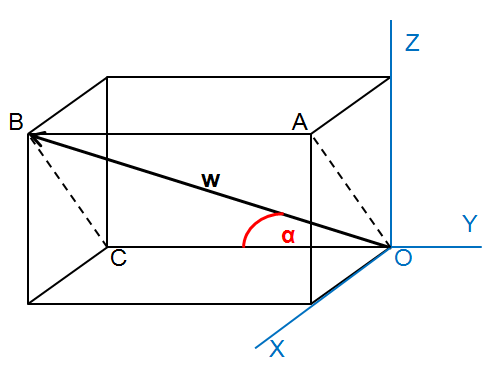 In the equation (21) we computed in fact α using the cosine formula in the triangle OBC. Now, we will compute it using the tangens formula:

Here, wxz is the projection of the vector w onto the XZ-plane:

Even if this formula looks more complicated than the formula (24) it is often recommended because it avoids the calculation of the angle δ between the two points P1 and P2. However, significant care must be taken by applying atan() to the equation (28). A simpler way is to use atan2() instead of atan():